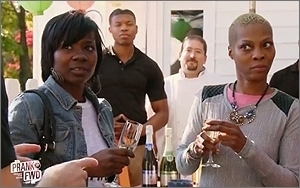 Barefoot Wine and Bubbly is sponsoring the recently debuted “Prank it FWD” video series on Break.com.

The video “She’s Got it Maid,” launched Monday and includes both product placement and verbal mention of Barefoot as the sponsor. The “prank” is actually inspirational as the housekeeper who is the subject of the joke is given a new home.

This is the second iteration of the video series, which began in April and quickly amassed more than 30 million views. Break.com is owned by Defy Media.

“Barefoot is all about fun and giving, so Prank it Forward is the perfect match,” Windram tells Marketing Daily. “They share our values and vision of making the world a better place and we’re happy to not only help make this positive prank possible, but to help change someone’s life and have fun doing it.”

“We were so moved by the Prank It Forward concept after seeing ‘Best Shift Ever,’” Windram says. “We laughed, we cried, we shared it with our friends and family. We think we have achieved the same feeling with this prank. The look on Cara’s face when she realized this was her new home and her dream vacation was on the horizon was priceless – we’d do it all over again.”

The target for the initiative is people who share the Barefoot ethos that life should be more fun and less serious, she says.

“April’s ‘Prank it FWD’ delivered above and beyond anything we could have expected,” says Barry Blumberg, head of content, Defy Media. “Our content struck a chord with the public and significantly changed the life of one of our participants, in addition to moving many viewers to ‘Prank it Forward’ in their own communities.  This time around we challenged ourselves to go bigger, and what better time than the holiday season to share more good and prank-filled surprises? The results will undoubtedly bring cheer to everyone that watches.”

The “victim” of the current video, Cara Simmons,  is a housekeeper and single mother of three in Cleveland. Recently hospitalized for stress and exhaustion, she was nominated for “Prank it FWD” by her sister and boss. When Cara’s boss sends her to work an important job cleaning a new house, some incredible surprises await her behind the front door and the day is topped off with a life-changing gift that not even her loved ones saw coming.

Break.com also expands its partnership with charitable partner DoSomething.org. In addition to donating one dollar for every 1,000 views of the “Prank it FWD” videos; an additional dollar will be donated for every social mention and share of #PrankitFWD. In April, the program reached the donation goal in less than two weeks.