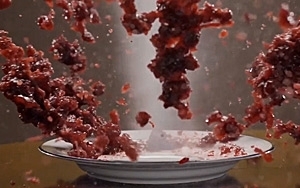 Watching cranberries explode is fun, but does it sell homes? Century 21 aims to find out.

Blowing up a side of cranberries and sharing that video on YouTube may have no direct connection to selling houses, but it is likely to generate attention among consumers. And that’s the name of the game.

Century 21 is taking advantage of the holiday season to amuse consumers with a series of videos depicting the destruction of the least-liked Thanksgiving foods, and then sharing them on its Facebook and YouTube channels. The seven “Thanksblasting” videos will make their appearance daily during the week before Thanksgiving.

The videos are just the latest effort on the part of Century 21 to engage consumers online, where many searches for new homes take place, Gentile says. Since May 2013, the company has doubled down on its real-time marketing efforts, launching initiatives ranging from creating a phone listing for “Breaking Bad” character Walter White’s house on Craigslist to touting their expertise in selling “slightly haunted” houses. The effort, which has included photos, videos and other memes, has been all focused on engaging the consumer through entertainment.

“For us, it boils down to providing opportunities for our sales associates and brokers to engage with their customers,” Gentile says. “It gives them an opportunity to have a conversation [with customers], and if you can do that you can drive interaction from online to offline.”

The efforts also help Century 21 connect with millennial consumers, who have yet to establish real-estate loyalties, he says. “The campaigns themselves take on a life of their own and help us connect with a younger consumer,” Gentile says.