BBDO Back In The Insurance Game With American Family Win 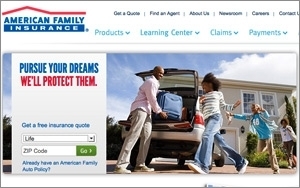 The appointment came after a review in which WPP’s Grey was the other finalist. The incumbent was Ogilvy & Mather, which resigned the account earlier in the year due to a conflict.

American Family Insurance spent $154 million on ads in 2013, according to Kantar and $82 million during the first half of this year.

The Madison, WS-based insurance company said that during the two-month review process it sought a fresh approach to its “Inspiring, Protecting and Restoring Dreams” marketplace positioning that would “further differentiate the company from its competitors.”

“Over the last three years, American Family Insurance has sparked a rich conversation with the nation around the power and purpose behind having and pursuing dreams and how we help our customers to achieve their dreams,” said Telisa Yancy, American Family’s vice president of marketing. “We believe BBDO NY will play a significant role in helping us to continue to change the mindset of consumers about insurance.”

A previous Super Bowl advertiser, it’s believed that the company is considering buying time in the 2015 Super Bowl in February, although neither the company nor the agency were commenting at deadline.

John Osborn, President and CEO of BBDO NY, commented, “We see American Family as a challenger brand, and we are excited to help them achieve their fullest potential.”

For BBDO, the win marks a return to the insurance category, where it last did work in 2008 for AIG. The assignment is the third $100 million-plus win for the agency in the U.S. this year. Earlier, it was awarded the CVS and Wells Fargo accounts.