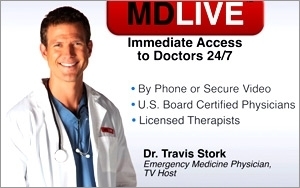 Telehealth just took a giant step closer to mainstream America, with Walgreens announcing that it is offering doctor’s appointments through its Web site and mobile app. The partnership with MDLive, which it says will “transform retail digital healthcare delivery,” provides access to doctors 24 hours a day, seven days a week, is already available in Michigan and California, and will continue to roll out in the months ahead.

The announcement is the latest digital initiative from the Deerfield, Ill.-based retailer, which already offers 24/7 support with pharmacists, and recently started selling its own brand of wearable.

While this is the first partnership of its kind, industry observers expect similar developments, as retailers continue to disrupt the rapidly changing healthcare field. CVS has said it is testing tele-health capabilities in 28 locations, using its nurse practitioners. And last month Rite Aid announced it was partnering with HealthSpot to test its private, in-store kiosks that connect customers to physicians for consultations.

A recent report from IHS predicts a 10-fold increase in tele-health through 2018, with usage increasing from fewer than 350,000 in 2013 to 7 million in 2018, and revenues climbing from $440.6 million to $4.5 billion in 2018. Wearables are expected to play a key role in the expansion, it says, providing more digital data to help doctors monitor patients.

The Walgreens wearable accepts incoming calls and texts, and lets users earn points based on their activity level.