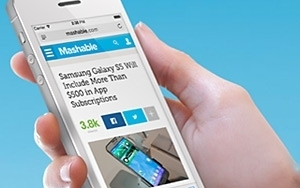 With advertisers demanding more accountability from digital ads around issues like viewability and human interaction, inPowered is moving to bolster confidence in native advertising by guaranteeing engagement for native ad content delivered with its platform, the company announced Wednesday.

The inPowered platform, which creates native ads using editorial content from third-party publishers (review sites, enthusiast blogs, etc), is offering guaranteed engagement, defined as the proportion of viewers who clicked and spent at least 15 seconds or shared it online.

Advertisers will not have to pay for any ad that doesn't meet this standard.

In conjunction with the viewability guarantee, inPowered is introducing a new dashboard that reports campaign performance statistics, including impressions, clicks, reads, shares, average time spent, consideration and engagement rate. inPowered measures consideration through online surveys asking consumers if they are more likely to buy a product after viewing a native ad powered by inPowered.

The new dashboard also offers tools for discovering and promoting relevant content, including data on author profiles and how much social engagement the content has already generated, and previews of how promoted content will look as a native ad.

Explaining the decision to begin guaranteeing viewability and engagement, inPowered co-founder Peyman Nilforoush argued that the generally low quality of native ad content threatens to undermine the model, noting: “With native content, 67% of people who click on a native link drop off before 15 seconds, compared to just 33% for actual editorial content, and only 24% ever scroll down to read more on native ads.”

Nilforoush attributed this to the fact that “a lot of people are click-baiting consumers,” pandering for clicks with misleading ads that leave the consumer disappointed when they reach the actual content, adding: “There's a completely different alternative to click-bait — finding the best content about you, promoting it, and then driving engagement with transparent promotions.

Recently, native ad company Sharethrough guaranteed native ad viewability, defined by the Interactive Advertising Bureau as 50% of the ad pixels being in view in a browser window for at least one second.