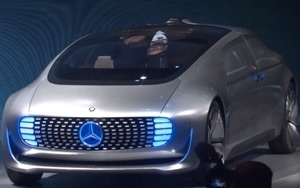 The Consumer Electronics Show in Las Vegas kicks off just days before the North American International Auto Show in Detroit. That means frequent flyer miles for auto executives. But shuttle diplomacy notwithstanding, the timing is actually pretty good. It extends automakers' show-and-tell and bifurcates it nicely: CES lets them focus entirely on the increasingly rich world of telematics and autonomous car technology, and Detroit is, of course, about the whole car.

Thus, as vehicles move toward both autonomous function and greater entertainment-connected integration, CES is becoming as big a stage for automakers' ambitions as the show in the frozen north. Yes, every automaker is in Detroit, but 10 are at CES. Not too shabby.

Ford's CEO Mark Fields, in a CES keynote on Tuesday, announced the “Ford Smart Mobility” plan that includes some 25 mobility experiments around the world, including 8 in the U.S., and 11 that are part of Ford's “Innovate Mobility Challenge Series,” an open-to-all program. Several of the experiments involve car-sharing. The automaker also debuted its third-generation Sync telematics platform, aptly called Sync 3. And, like other automakers, Ford is offering its direction for autonomous cars.

Along those lines, Mercedes-Benz on Monday night showed a totally autonomous conceptual luxury saloon, F015, with driverless capability, and things like connected, interactive, and gesture-reactive windows. The car is essentially a luxury living space on wheels says Michelle Krebs director of automotive relations at AutoTrader.com, who was lucky enough to be there. “What we are seeing with Mercedes' concept car are things that are possible now. A way for automakers to do research.”

The direction toward autonomous cars isn't new, notes Krebs. “We have been progressing in that area for a long time with technology like ABS, traction control, electronic stability, lane-departure warning, active cruise.” At the event, Mercedes also showed an S-Class that is autonomous. It’s not a production car, but it might as well be.

Daimler AG CEO Dieter Zetsche said a major tangle about autonomous cars isn’t technology, but ethics and the law. “Who are we going to hold responsible in the unlikely event that an autonomous car crashes,” he said. And he pondered the ethical issue of how the car decides, in the event of an unavoidable accident, whether to collide with a small car or a truck.

“There’s a lot of work to do,” says Krebs. “That's why you start to see GM partnering with Progressive, and Ford in London working on that as well.”

Ford's program, one of its 25 global experiments, is on data-driven insurance around gathering vehicle performance data toward personalized insurance rates. General Motors’ program with Progressive is a sign-up service where, through GM’s OnStar platform, drivers get feedback on their performance and, for safe drivers, potential insurance discounts from the insurer after a 90-day evaluation period.

FCA, meanwhile, is showing four new “Uconnect Access” in-vehicle services available in the first half of 2015: Vehicle Finder lets drivers view where they parked on a smartphone app and find a route to the car; Send Destination to Vehicle lets customers send an address to the on-board navigation system remotely. There are also Monthly Vehicle Health Report and Vehicle Health Alert services.

Among some 13 technologies BMW is talking up, there are new systems geared toward its "Vision Zero" goal of accident-free driving. For that, there's a 360-degree collision avoidance, a program around on-board cameras, and reactive cruise control. The automaker is also showing an experimental laser-based scanning system that includes automated parking capability.