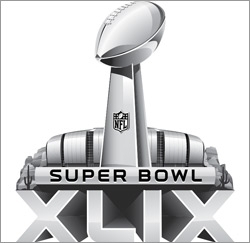 Even with some slowdown in TV advertising, TV’s biggest TV event, the Super Bowl, is estimated to rise again this year in total revenues — looking to surpass its $331 million mark of a year ago.

“Healthy demand is expected to result in higher pricing for the 2015 game,” according to a report prepared by Jon Swallen, chief research officer of Kantar Media North America.

Kantar Media notes the 30-second price tag has climbed 75% in the past decade with total advertising for the game, from 2005 to 2014 — pulling in $2.19 billion in TV advertising from 130 marketers.

Kantar notes that the five most recent Super Bowls have been the most ad-saturated in history. Last year, there were more than 49 minutes of advertising time, with 83 individual commercials overall. Some 40% of those commercials — 22 spots — were longer 60-second commercials, the highest share since the mid-1980s.

Twitter says for the 2014 event, more than 24.9 million tweets about the football game and halftime show were sent.