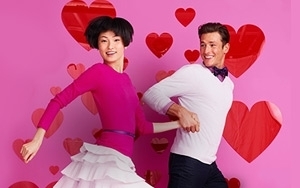 Feeling flush from a peppier economy and lower gas prices, people are in the mood for love. A survey from the National Retail Federation reports that Americans who choose to celebrate this year will spend $142.31 this year, up from $133.91 in 2014. And total spending is expected to be $18.9 billion, the highest since the survey began back in 2010.

And in good news for department stores, they lead the list of preferred shopping destinations, with 36.5% of those surveyed intending to shop there. Discount stores are next, with 35.2%, and 25.1% plan to shop online. About 13.3% will buy something at a local or small business.

“It’s encouraging to see consumers show interest in spending on gifts and Valentine’s Day-related merchandise,” says Matthew Shay, the trade group’s president and CEO, in releasing the research, “and a good sign for consumer sentiment as we head into 2015.”

Separate research from Omaha Steaks reports that 71% percent of its sample prefer to eat in, and feel the most loved when their Valentine cooks or gives them their favorite foods. Top choices, however, aren’t beefy: 60% like to be spoken to in chocolate, while 43% prefer wine.

The NRF says 21.1% of its survey, based on responses from more than 6,000 adults, will buy jewelry. They expect to spend $4.8 billion on bling, also a five-year record.

The holiday is typically also a big day for hotels, and our favorite promotion this year comes from the Curtis Hotel in Denver. For $869, it’s offering an evening it calls “50 Shades of Lucy,” combining plenty of rum, handcuffs and other sex toys inspired by the new “50 Shades of Grey,” plenty of rum, and red hair dye.