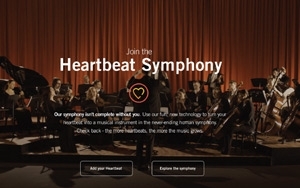 San Francisco-based Dignity Health is celebrating American Heart Month in February by creating the first ever symphony composed of human heartbeats. This original composition by professional composer Miles Kennedy and a 24-piece orchestra initially created a melody from the heartbeats of more than 200 Dignity Health caregivers.

Now, Dignity Health is inviting everyone to contribute their own heartbeat. Contributors upload their heartbeats and find out which instrument is a match – including a piano, violin, or a French horn - and their music gets incorporated into the “Heartbeat Symphony.”

"While this interactive symphony is primarily designed to connect individual heartbeats together to form a living musical expression, the idea of using one’s heartbeat was a natural place for us as a health care organization," says Mark Viden, Vice President, Brand Marketing at Dignity Health. "Indeed, Hello humankindness is a movement to make the healing power of humanity more evident in the world and music is a beautiful, and accessible, way to do that."

Agency Eleven and partner Acne Productions are utilizing technology from MIT that creates a web experience from heartbeats that  are transformed into music. A video sequencer pairs the user’s customized piece to footage of musicians playing their heart’s music in real-time.

"Our heartbeats have their own rhythm - so our question was, could it be translated into music?" explained Viden. "It’s been fun to build out how something like this could work. The music itself had to be composed in a way that it could grow with every added heartbeat. Then we had to invent a way for the heartbeat-reading technology to turn that into musical notes."

After individuals contribute their beats, they are encouraged to share their tailored Heartbeat music with their friends and families via email and on social media.

Dignity Health will be promoting the experience through social media content on Facebook, Twitter and Instagram and supporting conversation with #HeartBeatSymphony. "We see this effort being particularly strong with women, ages 25 to 55," says Viden. To get the word out to this demographic, Dignity Health has been using targetted paid media.

Technology, unsurprisingly, was a key challenge in executing this campaign. "Getting the technology to work seamlessly across different platforms -- mobile, desktop -- was the biggest hurdle," says Viden. "iOS proved especially difficult as the heartbeat capture requires the use of the phone’s video camera: Apple walls that functionality off from third-party developers so we needed step-by-step directions that allowed for a video upload."

Still, Dignity Health sees branded content, such as the Heartbeat Symphony, as a key channel to reach consumers. "And we see a high potential for this effort in the social media space given that this technology is not yet widely used," says Viden. "We always view branded content with an eye to leveraging the work in more traditional media, such as radio or broadcast. For this effort, radio may be a natural extension given the music that we are generating with all the heartbeats that are contributed."

Eleven developed the concept and created the interactive elements and site design, as well as the behind-the-scenes video to help bring the experience to life.  The shop’s creative and technical savvy is a key reason why Dignity Health selected Eleven as its agency in May 2012. "We did so because of their unique perspective on the world," says Viden. "I think what you are seeing in the interactive symphony is an example of their creativity. They have taken this concept of humankindness beyond advertising into a fun experience that people can easily share online through their social channels."