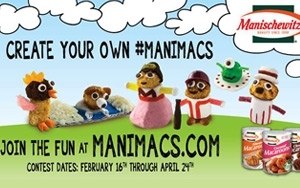 Founded in 1888, The Manischewitz Company has become well-known for its Passover matzo. Since then, however, the specialty food company has expanded to include items, like Tam Tam Crackers, Chicken Soup, Macaroons, and Gefilte Fish.

With more than 350 products, the company continues to serve primarily kosher consumers.

Now, Manischewitz is launching the "Matzo and So Much More" campaign to showcase its array of products and their potential appeal beyond its core kosher consumer base. The campaign includes new packaging, videos, and a social media sweepstakes running through Passover on April 4.

According to the company, "this really shows how much fun and how creative Manischewitz is — and focuses on how we tap into the do it yourself trend, bringing fun to the Macaroon category, it taps in social media and video as well as the contest.”

Macaroons are a key focus for the brand’s potential to crossover to mainstream consumers. In partnership with creative agency Harvey and Daughters, the campaign is introducing a series of videos to highlight the New Macaroons. The concept celebrates unique holidays – such as Alien Abduction Day on March 20 and National Puppy Day on March 23. The videos run across multiple digital channels, including Twitter, Facebook and Google.

To support this creative, the company is launching the #ManiMacs contest inviting people to submit their own character made of Manischewitz Macaroons for a chance to win an iPad Air 2 or $500 Visa Gift Card. The contest runs through April 16.

In addition, on March 12-13th in Chelsea Market, New York City, the company will host the first ever Manischewitz Pop Up Experience. This two-day festival will feature celebrity chefs, live demonstrations, and product sampling. Jamie Geller, dubbed “Queen of Kosher,” celebrity chef and author of "Joy of Kosher," will host live cooking demonstrations throughout the first two days of the event.

On the second and third day, the event will feature Celebrity Chef Katsuji Tanabe, winner of Food Network’s “Chopped” and current contestant on Bravo’s “Top Chef Boston” and owner of MexiKosher in LA.

“We are thrilled to be the first kosher company to ever host such an elaborate event and take over a retail location within NYC’s popular Chelsea market,” says Mark Weinsten, CEO of The Manischewitz Company.

"We want to show people the breadth of our brand and demonstrate that there's so much more to Manischewitz than just matzo. This event is to show consumers that we are still working hard on creating delicious food for people to enjoy. Having our consumers come to this event gives us an opportunity to talk to them face to face," he adds.

In addition to its creative shop, the privately-held Manichewitz is working with the Bender Group for PR outreach and event agency Awestruck.