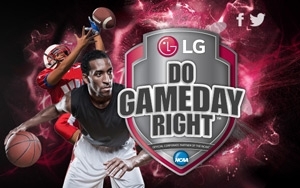 LG Electronics USA is continuing its ties — and deepening its engagement — with the NCAA, by extending its official partnership with the organization through 2018.

“We both inspire and we both believe in excellence,” Michelle Donovan, director of consumer promotions and events for LG, tells Marketing Daily about the the rationale behind the agreement. “At the end of the day, we provide a solution to do game day better, just as an athlete prepares for his or her game day better.”

In concert with the extended agreement, LG has launched a college sports digital destination, www.LGGameDayHub.com, which will serve as the brand’s central location for NCAA-related content, including sweepstakes, trivia and information about how LG products can “do game day right” (such as preparing snacks on LG appliances or checking information on LG phones), Donovan says. The new site is a year-long extension of a program LG started last year for the NCAA Men’s Basketball Championships.

“The digital hub is the first wave of our extended agreement,” she says. “We really wanted to capitalize on the ability to talk about NCAA sports throughout the year, not just in March.”

The site currently includes trivia games, flash-powered games, a photo contest and a sweepstakes to win tickets to the Final Four in Indianapolis. Currently heavily basketball themed, the site’s appeal will change with the shifting of sports seasons, Donovan says.

The extended agreement, which includes collaboration with CBS Sports and Turner Sports, will include extensive presence at many different NCAA sporting events throughout the year.

“LG has been a key member of the NCAA Corporate Partner family for six years now,” said Keith Martin, NCAA managing director, marketing and broadcast alliances, in a statement. “This partnership is great for both the NCAA and LG, but even more so for the fans, who enjoy the rich game-day experiences LG and its products make possible.”