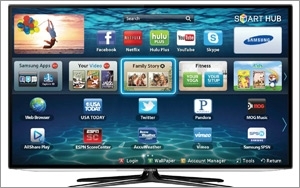 Internet-connected televisions are catching on faster than projected, and are squeezing out Blu-Ray disc players as a way to access streaming and Internet-based content in the process.

“Part of that is the manufacturers  have developed better interfaces for consumers to use,” John Buffone, executive director of Connected Intelligence for NPD, tells Marketing Daily, “and part of it is more [content created] for distribution.”

While video game consoles and streaming media players are the most-used TV app platforms, the rapid growth of Internet-connected televisions will broaden the audience for streamed content even further, Buffone says. Indeed, NPD projects there will be 47 million connected TVs in use in the U.S. by 2017.

“Going forward the key to success for connected TV and attached content device manufacturers will be the availability of apps from top TV networks,” Buffone says. “This aspect of the app marketplace will become even more critical during 2015 as HBO and Showtime follow CBS and become available without a cable or satellite pay TV subscription.”

The biggest factor hindering the growth of the market, in fact, is the presence of streaming hardware such as Roku, Amazon Fire TV and Google’s Chrome Stick, which undercut the urgency of having to buy a new television in order to watch streamed content.

“Consumers generally update their displays every 5-7 years. It’s a long-tail cycle,” Buffone says. “[Meanwhile], there’s several other streaming devices out there that do the same things.”