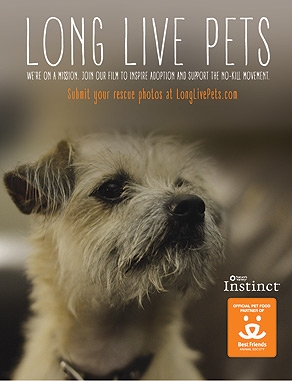 Some 3 million to 4 million adoptable pets are killed in U.S. animal shelters each year because they can't find homes. Now, pet food manufacturer Nature's Variety and creative agency StrawberryFrog are introducing a nationwide movement to rally Americans to save the rescue pets available for adoption.

The "Long Live Pets" social initiative invites pet parents to upload images of their rescue dog to LongLivePets.com or via Facebook, Twitter or Instagram using the hashtag #LongLivePets.

These photos will then be transformed into a short film that will premiere on national TV later this spring.

“This movement-based campaign delivers a powerful and important message to raise awareness and inspire actions to help end the killing of animals in America’s shelters, a mission that our customers, retail partners, and employees all care deeply about," says Robert Bennett, chief marketing officer of Nature’s Variety.

"This campaign is designed to be uplifting, inspiring, and engaging and the early response has been fantastic,” he ads.

The campaign includes coordinated paid and earned social outreach as well as a more traditional media campaign to drive pet parents to the site. Collectively, this campaign's goal is to elevate the brand beyond traditional pet food advertising.

"This campaign ups the ante for pet food brands, with innovative Web video usage and crowdsourced photos from pet owners," says Scott Goodson, founder of StrawberryFrog. "The storyline, built almost entirely of hundreds of dog owners' photos, will tell an amazing story of every rescue dog's second chance at a long, happy life."

The Long Live Pets campaign was conceived and created by StrawberryFrog New York and produced together with creative partner B-Reel. Media buying is being handled by True Media and public relations support is being supplied by The Vandiver Group.