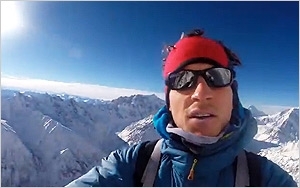 The North Face, the outdoor brand that already celebrates thrill-seeking mountaineers, is taking viewers one step closer to the real thing, with a virtual reality adventure to Yosemite and Moab.

The company is offering an early glimpse of “The North Face VR” at SXSW, and intends to roll the experience, created with Jaunt, out to stores in Chicago, New York and San Francisco in the coming weeks. Viewers follow Cedar Wright and Sam Elias, two of its global climbing athletes, as they prep rope, climb and set their plans for the day.

Captured with Jaunt’s "360-degree, stereoscopic 3D cameras and advanced 3D sound-field microphones,” the company explains in its release that “the content places viewers right in the middle of the scenes with complete freedom to look around in any direction and experience every moment as if they were actually there.”

(The North Face VR debut is scheduled to become available for download by the public starting March 16.)

The company joins a fast-growing list of brands using VR experiences to whet the appetites of their adrenaline-loving audiences, including Merrell, an outdoor brand that gives shoppers a taste of a hiking trail via an Oculus Rift experience, and Mountain Dew.

For the North Face, the VR journey makes a natural follow-up to its fall/winter campaign, which pushed people to connect with their inner explorer to benefit public lands in the U.S. In addition to its donation of $250,000, it features a remake of the classic “This Land is Your Land” by My Morning Jacket. Half of the proceeds from each download went to 21Century Service Corp., creating jobs for youth and returning veterans on public lands across the country.

VF recently announced strong results for the North Face brand, with fourth quarter revenues climbing 12%, up a mid-teen percentage rate in the Americas, over 25% in Asia Pacific, but down in the id single digits in Europe. And for the full year, its revenues increased 11% to $2.3 billion. For the year ahead, it expects sales to rise by in the low double digits.