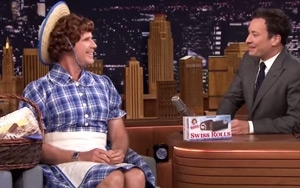 What might it cost for a 10-minute "brand integration" during "The Tonight Show with Jimmy Fallon" — including Fallon himself eating the product while reading promo copy — if that kind of media buy was ever to be made available?

How much might the resulting social media buzz and "earned media" coverage be worth in brand recognition and sales lift terms?

In what was apparently an amazing stroke of good luck, the makers of Little Debbie snack cakes were free beneficiaries of that level of exposure on March 18, when comedian/actor Will Ferrell appeared in costume as "Little Debbie" on the late-night institution.

Afterward, McKee Foods, the Tennessee-based parent of Little Debbie, Drake's, Heartland Brands and the Fieldstone and Sunbelt Bakery brands, issued a statement saying that the company was "delightfully surprised by Will Ferrell’s appearance on 'The Tonight Show Starring Jimmy Fallon.' While this was not a coordinated publicity stunt, nor a paid advertisement, we appreciate both the humor of the segment and the exposure of our Little Debbie brand to Jimmy Fallon’s huge national TV audience.

"In our opinion, Will Ferrell did justice to the cowgirl hat and the blue and white dress that are hallmarks of Little Debbie," the statement continued. "We appreciate his enthusiasm in playing the part. We also enjoyed seeing the studio audience so eager to get their hands on our delicious snack cakes."

During "The Tonight Show" appearance, Ferrell facetiously claimed that he had to wear the brand character's blue plaid dress, white apron and straw hat because he's "the new face of Little Debbie snack cakes." Later on in the appearance, he declared that he had signed a 30-year deal in which he has to be in Little Debbie character more or less 24/7, until he is 77 years old.

During his first seven-minute segment, Ferrell did a shtick in which he closed his eyes and differentiated a Little Debbie snack cake from a hot baked potato. He also teased the audience and elicited cheers by asking if they love snack cakes ... only to let them down by telling them that they had the "opportunity" to go buy Little Debbie products. (Although at the real commercial break, he did go out into the audience and distribute some free Little Debbie products he'd brought in a basket.)

Ferrell's real "Tonight Show" mission was promoting his soon-to-be-released movie with Kevin Hart, "Get Hard," but Fallon was the only one to make a couple of fleeting references to the movie.

One came when Ferrell got Fallon to eat a Little Debbie Swiss Roll (a box of which sat on the front of Fallon's desk during the segment) while delivering copy, ostensibly about the snack brand, written by Ferrell.

Only "Tonight Show" viewers already aware of the plot line of the satiric "Get Hard" comedy may have caught the thematic connection to the movie in the bogus, risqué promo copy read by Fallon, which said in part: "There's nothing I like more than sliding a chocolate roll into my mouth...'Get Hard' comes out March 27 ..."

The movie's premise: a white financier headed for prison cluelessly hires an African-American man (who is actually a family man with no criminal history) to teach him how to survive in prison.

During his second, three-minute segment on "The Tonight Show," Ferrell joked with Fallon about the supposed traumatic effects on his children of being disciplined by a father who is "Little Debbie."

In under two days, the video clip of Ferrell's first "Tonight Show" segment has generated nearly 2 million views on the show's YouTube channel alone, and the second, three-minute segment's YouTube views are at this posting headed toward 400,000.

And the Little Debbie brand is attempting to make the most of the unexpected marketing windfall not only by issuing its good-natured reaction statement, but also by putting out humorous follow-ups on social media.

Examples: On the Little Debbie brand's Twitter account, a post on March 19 stated: "We didn't arrange Little Debbie's appearance last night on late night comedy, but we thought it was hilariously funny."