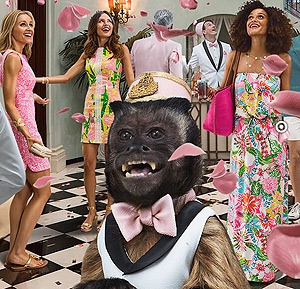 To celebrate the upcoming launch of its much-buzzed-about Lilly Pulitzer for Target collection, Target is using an app that brings the campaign to life, right down to a Palm Beach palazzo, actor Chris Noth and a monkey serving cocktails.

Featuring 15 patterns exclusive to Target, the new line includes 250 items, priced from $2 to $150, with most — 200 — priced under $50, says a spokesperson for the Minneapolis-based retailer. A TV spot, created by Chandelier Creative, is scheduled to begin airing April 12, and features the kind of wild Palm Beach party Pulitzer herself might have thrown, with flamingos, poolside dancing and plenty of print dresses, bathing suits and accessories, from swizzle sticks to hammocks.

The collection even includes cosmetics, with exclusive L'Oreal lipsticks and Essie nail polishes. A print campaign — which is a departure for Target, featuring the new prints but not the product shots — is intended to tease shoppers, and began running in April magazines.

The app is a first-of-its-kind for Target, says the spokesperson, and allows users to navigate through the different rooms of the party, clicking on items as they go. Olson, the Minneapolis-based digital agency, created both the app and the digital experience. “It’s new for us to use an app this way,” she says.

And it’s just published its extensive Lookbook for the collection, which quotes the late designer: “Anything is possible with sunshine and a little pink.”

Pulitzer, a Palm Beach socialite, burst on the fashion scene in 1959, and with her brightly colored dresses, singlehandedly created American resort wear. While the collection has generated plenty of attention since it was first announced back in January — including plenty of tsk-tsking tweets from fashionistas insisting the late socialite was likely spinning in her grave, it’s not the largest. That honor goes to the 2011 Missoni collection, which created such a shopping stampede that it crashed the retailer’s site.