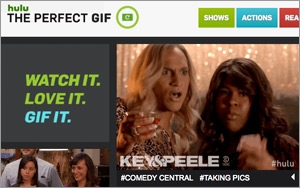 The Perfect Gif at launch will offer more than 1,400 GIFs from dozens of its top shows across Fox, NBC, ABC, MTV, Bravo, FX, and Showtime, as well as from Cheers, Star Trek, Twin Peaks, and The X-Files. Site visitors can search for the short clips by tag or show title.

The GIFs are branded with specific hashtags like #Hulu, #ABC, #TV Land, among others. Included in the line of hashtags are #WTF, #Awkward, and #Sneaky. Techcrunch first identified the new site, calling it a promotion vehicle for Hulu.com. The clips are easy to share on social sites via a mobile phone or from desktop computers with the ability to link, email or download the GIFs, as well as share on Tumblr, Tweet on twitter or Pin it on Pinterest.

GIFs have become popular. Google recently began to comment, rather than not commenting, about a variety of topics through GIFs. For instance, the re/code reports Google used a GIF in response to a Wall Street Journal post titled "Really, Rupert?" on Google's Policy Blog.

Gizmo even published a list of the best GIFs in 2015, beginning with animals, art and design, film and television, and music.