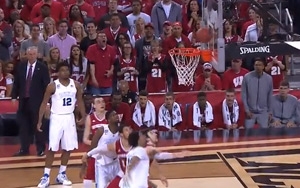 Sixteen corporate sponsors each spent millions to be associated with this year's March Madness tournament that ultimately saw Duke beating Wisconsin, but new research from Amobee Brand Intelligence finds that it may not pay for brands to play in this college tournament.

In fact, non-official sponsor McDonald’s proved to be the most “consumed” and “seen” brand in association with March Madness, according to the research, which looked at how often brand names were seen across 600,000 online content sites, including mobile and social media between March 17 and April 6.

McDonald's beat out paid sponsors AT&T, Buffalo Wild Wings and Bing in terms of visibility thanks to regular discussion of star players having achieved McDonald’s All American status in high school. By comparison, non-sponsors Nike had 40% and Gatorade had 25% as much March Madness related mentions as McDonald’s between March 17 - April 6, thanks to their organic involvement, including dumping the sports drink over the head of the winning coach and Nike's sponsorship of top teams and coaches.

Only half of the top 10 March Madness brands that attracted attention among online and social media users were official sponsors, according to Amobee. McDonald’s, Nike, Gatorade, Pizza Hut, and Taco Bell were the top March Madness associated brands which were not official sponsors, while AT&T, Buffalo Wild Wings, Bing, Capital One, and Buick were the top brands who were event sponsors.

Looking at official “Corporate Champions” sponsors, AT&T, Coke Zero and Capital One, saw 55% of their March Madness related online digital consumption occur either between March 19-20 during the round of 64 or on April 4, the day of The Final Four.

Only 2% of March Madness related brand consumption occurred on April 6, the day of the National Championship game.

"The pattern is unmistakable and not typical of sports tournaments,” said Amobee SVP Product, Marketing and GM Ammiel Kamon. “Usually the finals go for big bucks and the playoffs are sold as filler," he added. "For the NCAA Tournament, the brands should think about it in reverse in terms of the value they get."