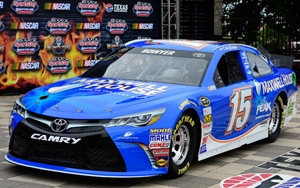 The Kraft Foods coffee brand will be the team's primary sponsor for five Sprint Cup races between August and November 2015, and the Daytona 500 in February 2016.

Clint Bowyer will drive the car in four Sprint Cup races, starting at Pocono Raceway in August and including Watkins Glen International, Martinsville Speedway and Texas Motor Speedway. (Maxwell House is an associate sponsor of the remaining Sprint Cup races.)

Maxwell House also sponsored Waltrip back in 1989, near the start of his career. "It's great to be back as part of the Maxwell House brand family," Waltrip tells Marketing Daily. How have sponsorships changed in that time? Social media has been a game changer in terms of amplifying sponsorship awareness and building on relationships with fans, but the core goal of all sponsorships remains the same, he says: "Winning on Sunday and selling on Monday. If we can win and be in the winner's circle on TV, it means that more people will think of and pick up Maxwell House coffee when they go to the store."

Chris McClement, senior director for Maxwell House, stresses that NASCAR, Sprint Cup and Waltrip fans all "index very well with the Maxwell House brand — there's a significant, natural fit." (The brand sponsored driver Matt Kenseth between 2007 and 2009, and did packaging sponsorships with Kenseth and Dale Earnhardt Jr. in 2003, in addition to various NASCAR-related Kraft corporate sponsorships over the years.)

The target audience fit, along with the enormous exposure and myriad marketing opportunities presented by such a sponsorship, made the new Waltrip partnership a logical "next step" in the brand's "renovation process," McClement says.

The strategic brand refresh — with its goal of attracting Millennials who share key attributes with the loyal Boomers who are the brand's bulwark — has included recent logo and package design updates. It also includes Millennial-friendly brand extensions, like its just-launched, Mio-inspired Maxwell House Iced Coffee Concentrates.

Kraft budgeted $20 to $25 million in advertising for the brand last year, with an emphasis on the digital, social and mobile channels where Millennials, and the generation coming up behind them, live.

The venerable (launched in 1892) brand, which was the country's largest-selling coffee for decades up through the late 1980's, remains one of Kraft's most valuable assets, with annual sales exceeding $1 billion. So substantial marketing investments to secure Maxwell House's future — such as this racing sponsorship — are by no means surprising.

McClement reports that while many of the specifics of the media and promotion plans have yet to be worked out (including how ads might be employed during TV coverage of sponsored races), it's a given that Maxwell House will be using its Facebook and Twitter channels to keep NASCAR and Waltrip fans up on and engaged with a wide variety of efforts around the sponsorship.

In fact, he confirms that social media's reach to the young, in particular, and its ability to tie numerous elements together, are also key reasons that the brand considers investing in the Waltrip sponsorship the right move at the right time.

Maxwell House teased its NASCAR-loving fans yesterday by posting a photo and message "reminiscing" about its past Waltrip racing sponsorship on its Facebook and Twitter pages, before posting a slew of content about the new sponsorship deal today.

The content marketing initiatives around the sponsorship are likely to include one or more "behind-the-scenes"-genre video series showcasing the Waltrip team, says McClement.

"Immersive experiences" with team members will be a major component, he adds, noting that sweeps and promotions via social and digital will likely give fans opportunities to win prizes like "meet and greets" scheduled around the Maxwell House-sponsored races, team-branded gear, and prime spectator seats at races.

It's certain, of course, that Maxwell House will be working closely with its key retailer customers, particularly in the markets hosting the sponsored races, to create tailored in-store promotions and sampling events, as well as arrange special appearances by team members, where feasible. Collectible packaging — a big draw for NASCAR fans that is also sure to please retailers — is another item in the mix of marketing possibilities being considered.