With New Line, The North Face Heads To The Gym 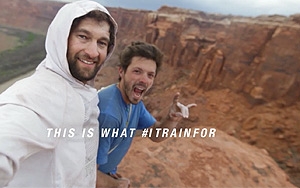 Looks like The North Face is using its indoor voice. The company is introducing a new campaign for Mountain Athletics, its training gear, with an effort that shares more with Reebok CrossFit or Under Armour than its usual outdoorsy competitors, such as Columbia Sportswear, Patagonia, or REI.

The line, which included men’s gear introduced last year and the brand-new women’s apparel, grew out of the insight that its core customers, whether they are skiers, climbers, hikers or runners, “are training very hard,” says Courtney Blacker, director of brand marketing at The North Face. “And since they’ve already embraced us for the sports they’re so passionate about, it was a natural extension to fill their training needs, too.”

The brand, which is owned by VF Corp., is introducing the expanded line with its biggest spring ad campaign ever, including its first spring broadcast TV spot. It showcases North Face athletes outdoors, but also at the gym, where they climb ropes, lug sandbags and push weighted sleds.

The move, which is meant to take the 50-year-old brand into all four seasons, also includes social, mobile and retail elements. The Mountain Athletics app allows users to set up very specific training goals, whether it’s to get ready for backcountry skiing, alpine climbing, or general fitness. It also includes  detailed videos demonstrating training techniques. A social campaign, with the #itrainfor hashtag, encourages sharing. And there are also free twice-weekly training sessions offered in five markets: New York, Chicago, Boston, San Francisco and Washington D.C. “We want to create a supportive community for training,” she says. The company estimates the global training apparel market is about $63 billion.

The ad campaign, which continues its overall brand theme of “Never Stop Exploring,” she says, “is all about capturing the intoxication of the unknown, to help people push their limits. Outdoor activities can be big and bodacious or small and personal. We want to inspire people no matter what.”

Last fall, the company made a big splash with its biggest ad campaign ever, a push to get people outdoors more. In its most recent quarterly results, VF Corp., which also owns such brands as Timberland, Wrangler and Vans, says revenues for the North Face rose 11% to $2.3 billion.