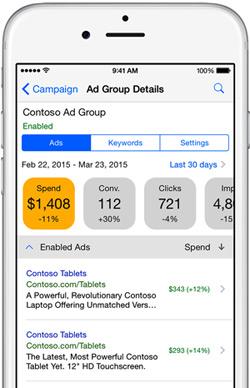 iOS support will initially roll out for ads serving up on devices running iOS 8.1 in the U.S App Store, with other markets in the near future. Microsoft said it also will support older versions of iOS, and an Android version to manage campaigns will follow next.

All these improvements will not amount to much if advertisers are not finding the return on investment they seek. Experts at one agency -- Havas -- believe mobile remains an under-invested media. Brands still question the effectiveness of mobile, wrote Raymond James Equity Research Analyst Aaron Kessler in a research note published Tuesday. Havas believes those that can crack the code on cross-device advertising will see the greatest investments in mobile.

Microsoft's relationship with Apple runs deep, and the Bing platform enables experiences such as Web results for Siri.

On Tuesday, Microsoft also announced the acquisition of Datazen, which focuses on mobile business intelligence, data and visualization software, for an undisclosed sum.

Last week, Microsoft announced a revamp of its mobile app. Research shows mobile users favor a swipe-up and down, so Microsoft engineers redesigned Bing's mobile home page for iOS and Android smartphones to meet their needs. A tap on the screen gives users more information about the image of the day.