Google Feels Rollercoaster Effect With Up And Down Revenue, Paid-Click Advertising 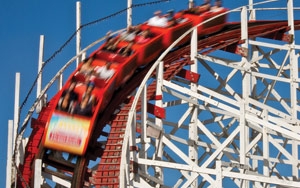 Patrick Pichette, CFO of Google, focused on the upside. "We continue to see great momentum in our mobile advertising business and opportunities with brand advertisers," he said in a prepared statement.

"It is becoming clear what a threat mobile has become for Google," Dave Ragals, global managing director, search at IgnitionOne. He agrees the shift from desktop to mobile is not new, but Google continue to see a negative influence caused by fragmentation. "This includes their algorithm changes around mobile-friendly sites, announced well in advance, which is a departure for the company, to encourage site owner behaviors and shape a mobile landscape to better suit Google’s needs."