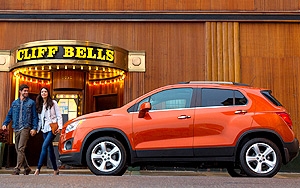 Chevrolet rolled into New York this weekend in a fleet of Trax compact crossovers and as many influencers. Call it an urban road trip — an Easter egg hunt for “Hidden Gems.” It was the second stop in a three-city tour that started in late February to tout the new vehicle as a city-smart freewheeler, a do-everything machine for the person who might be freelancing during the day for Lonely Planet, and playing tuba in an Eastern European soul band at night (just because a tuba fits in the back of a Trax.)

Beginning at the Willie Wonka-esque Dream Hotel downtown in Chelsea — a stone's throw from headquarters of sibling Cadillac, by the way — 20 influencers got a three-stop itinerary and a driver, and hopped into 20 Trax CUVs. All they had to do was have fun and share like hell on Instagram and Twitter and other platforms. A major point: social sharing was easy because Trax, as a Chevrolet vehicle, has 4G LTE WiFi. They did things like hear live music at a jazz club where the audience is about 50% jazz musicians; take a trampoline training class; see a butchery demo; and take a distillery tour.

Chevrolet Advertising Manager Matt Scarlett tells Marketing Daily that the entire campaign for Trax is digital, and every aspect is targeted. In that respect, it's similar to Sonic, which competes in a product category whose buyers the automaker identifies as youthful, urban, and adventurous. “And, like Sonic, it's a younger buyer who doesn't consume a lot of TV, and favors mostly online and mobile devices. If they do watch TV, it's going to be through platforms like Hulu," says Scarlett.

The Trax campaign, via Commonwealth/McCann, with Complex Media serving as a partner, started with four 15-second vignettes. They feature young people cruising around in the vehicle doing the kinds of things the influencers this past weekend did in the Big Apple. Each vignette involves trips that put to use such vehicle functions as varied as 4G LTE, rear cargo capacity, Siri Eyes Free, and parking agility. The people in one of the ads go to an offbeat bakery and then use GM's 4G WiFi to post about it. In another, some folks use 4G to find a food truck.

The first of the Hidden Gems grassroots/social media adventures, for which Chevrolet partnered with Complex Media, was Feb. 28 in Chicago, where, as now, 20 influencers toured the city. Scarlett says all of the influencers for Chicago, New York and (next stop) L.A. have a strong Instagram following, and that Complex was instrumental in finding them and developing the itineraries.

“The theme is going to places they haven't experienced and capturing it through video and photography,” says Scarlett. The campaign is centered at TraxHiddenGems.com, which also examines 25 other cities and offbeat, popular places “city smart” people would know about in those places.

Scarlett says the program might extend to include consumer-generated content — peoples' suggestions about their own cities. “We might be looking for peoples' hidden gems to add to it.” He says the platform might also expand to include other Chevrolet vehicles that the company is positioning around urban driving, like Sonic and Spark.