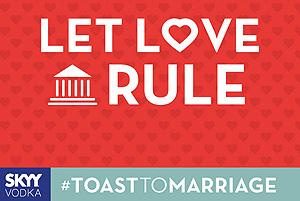 Leading up to the U.S. Supreme Court's decision on gay marriage, expected in June, Skyy Vodka is expanding its "Toast to Marriage" campaign.

The campaign, in partnership with Freedom to Marry, a national organization dedicated to winning marriage nationwide, is in its second year.

Skyy Spirits was launched by millionaire inventor/entrepreneur Maurice Kanbar in San Francisco in 1992. It was acquired in 2009 by Campari Group, which renamed it Campari America and made it into its U.S. marketing arm for Skyy, Wild Turkey and other spirits brands.

"For a vodka brand born in San Francisco, one of the pioneering homes of today’s progressive LGBT movement, the right for all people to raise a toast to marriage is paramount," sums up Campari America.

“Though we have supported the LGBT community for decades, we increased our participation in this important conversation last year," said Umberto Luchini, VP marketing at Campari America. "This year, we are working hard [with Freedom to Marry] to accelerate and amplify that discussion leading up to this key decision."

Between April and the end of June, Skyy will sponsor "a variety of high-profile events" with Freedom to Marry’s national campaign director, Marc Solomon, as well as host private dinners to connect supporters including political advocates, brand executives, creative professionals, and digital influencers. The events will be held in New York City, Dallas, Austin, Detroit, New Orleans and Washington, D.C.

A dedicated Toast to Marriage site, along with heavy social promotion encouraging supporters to express their views using #ToastToMarriage, are the core of the campaign. All of the channels are now publicizing the upcoming events.