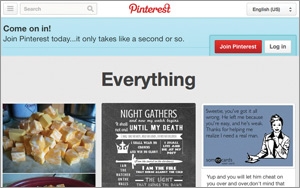 Challenging Google’s Android and Apple’s iOS, Pinterest is testing a developer platform of its own.

"By working with the developer community, we can strengthen verticals powered by Pinterest and bring more great content onto [the site],” said Josh Inkenbrandt, a product manager on Pinterest’s developer platform team.

“For example, the more Pinterest recipe apps there are, the more people will Pin recipes, which can result in better content and more engagement back on Pinterest, in addition to referral traffic and discovery of apps,” Inkenbrandt suggested.

Users have so far saved over 50 billion Pins on Pinterest, according to Inkenbrandt.

With the launch, Pinterest joins a growing numbers of social networks taking on established developer platforms like Android and Apple’s iOS. In partnership with Apple, Pinterest recently began letting users pin particular mobile apps -- effectively positioning the picture-based social network as a consumer-driven app discovery platform. Along with pinning apps, the move made it possible for users to discover apps on other users’ boards.

After eight months in beta, Pinterest launched its Promoted Pins program, at the beginning of the year. Brands that participated in the Promoted Pins beta program saw a 30% increase in “earned media” -- i.e., the share of users who saved a Promoted Pin to a board, according to Pinterest.

Per internal findings, Promoted Pins are “repinned" an average of 11 times -- the same as non-branded pins.

Pinterest is also more popular than ever. The proportion of online adult women using the service increased from 33% in 2013 to 42% in 2014, according to recent findings from the Pew Research Center.

Historically resistant to Pinterest, men even appear to be warming up to the platform. Indeed, the proportion of online men on Pinterest increased from 8% in 2013 to 13% last year.

Pinterest recently raised $367 million at a fresh valuation of $11 billion.

During its F8 Developer Conference in March, Facebook said it was turning Messenger into a platform for developers to directly distribute their apps to the service's roughly 600 million users.