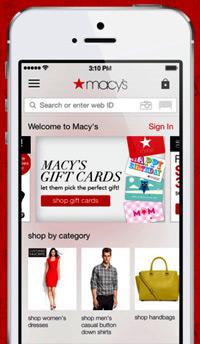 How much does America love its smartphones? So much that Deloitte Digital reports that digital interactions now influence 64 cents of every retail dollar spent, or $2.2 trillion by the end of this year. But behaviors are changing fast, with 30% fewer shoppers using their phones to check prices this year, for example, and more of them using them as sources of shopping inspiration. Overall, it finds that smartphones’ impact on sales jumped to 28% in 2014, up from 19% the prior year.

The new report also confirms that mainstream retailers, despite intensive investments in e-commerce, continue to fall behind, with the top 25 retailers giving up 2% of combined market share. “We are seeing a real change in the competitive dynamics, with digital as the great equalizer,” says Kasey Lobaugh, principal, Deloitte Consulting LLP and Deloitte Digital’s chief retail innovation officer, in the release. “The findings indicate that the large retailers are collectively losing ground to the much smaller competitors.”

The study, based on just over 3,000 respondents, also confirms that digitally-driven consumers buy 20% more often, and that those using social media while shopping are four times more likely to spend more. Hispanic and Latino consumers are the most likely to be influenced by digital, at 49%, compared to 32% across all ethnic segments. And 41% of Hispanic and Latino shoppers say they spend more as a result of digital activities, compared to 28% of the total sample.

Conventional retailers have been intensifying their efforts to build their omnichannel business, but still finding that competing with the digital juggernaut is complex. Macy’s, for example, which just logged earnings and sales below analysts’ expectations, is reporting promising response to its participation in Plenti, a digitally driven loyalty program in partnership with American Express. Still in the early weeks, it has already generated 2 million signups.

“We had expected our first quarter sales to grow at a rate lower than our guidance for the full year,” CEO Terry J. Lundgren says in its announcement. “We fell short because of a confluence of factors. Delayed merchandise shipments from the West Coast port slowdown and severe winter weather early in the quarter restrained business levels. Moreover, sales were negatively affected by lower levels of spending by international tourists visiting major U.S. cities with flagship Macy’s and Bloomingdale’s stores, including New York City, Chicago, Las Vegas and San Francisco.”