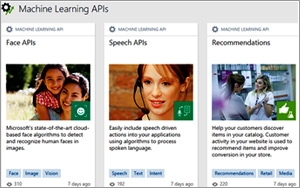 Microsoft has added a facial recognition feature to its Bing search image engine. The technology attempts to determine the gender and the age of a person who appears in a photo within its image search results.

Clicking on the image makes a box pop up that reads "use this photo." Site visitors can test it on how-old.net. Microsoft built the feature to showcase how developers can easily and quickly build intelligent applications through Azure services using face-detection APIs.

The technology extracts data on the gender and age of the people in the pictures, and pulls in real-time insights on the data. To view the results, Bing created a real-time dashboard.

Reports suggest that the feature is beginning to surface in image query search results, although Microsoft showed it off during its Build conference last month.

Understanding the patterns in real-time data from a Web site means using a set of Microsoft Azure streaming services. Microsoft imported the data using Azure Event Hubs, which Microsoft describes as a "publish-subscribe ingestor that can intake millions of events per second." The image is not saved, not the information identifying or linking to users. Only the document is streamed to Azure Event Hubs.

The idea is to show off and inspire developers to create their own solutions using Azure services and the APIs available in the Machine Learning Gallery. So Microsoft built an age detection Web site using its newly released Face detection APIs. The company admits that the "API is reasonably good at locating the faces and identifying gender, [but] isn't particularly accurate with age."