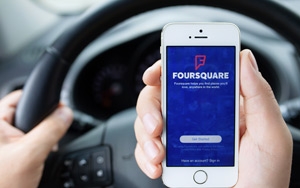 A common deep-linking technique used to search in mobile apps now lets Foursquare users book an Uber from its app with a button. The service is made possible through a partnership with a deep-linking tech company called Button.

Button powers the partnership between Foursquare and Uber, which also marks the debut of the technology on the Android platform and first expansion into international markets. Along with the United States, the technology is live in Australia, Canada, Ireland, New Zealand, South Africa and the United Kingdom.

It has become obvious that discovery and engagement on mobile is far different than on desktop. It involves "traditional search" less often, admits Mike Jaconi, co-founder and CEO of Button. "Search has been the best indication of intent that the Internet has offered, and as a result, Google has dominated search and commerce," he said. "In mobile, the pattern is different. Search doesn't work as well on mobile since so much information resides in apps where it can't easily be indexed."

In mobile, commerce companies that advertise in desktop search have begun to take back their relationships with consumers, Jaconi said. Apps are where people now start and spend their time, although some believe that Google will begin to try and drive consumers from apps back to the Web.

On a mobile device, using sensors and data that apps can access with permission, developers can infer intent and all of its associated content and context such as time, location, and history. This will enable brands to predict the path to purchase with a simple touch of a button. The mobile apps become a discovery and engagement channel and app-to-app behavior replace many traditional search functions on mobile, per Jaconi.

When a Foursquare user has indicated interest in going to a place that was searched for, Button's DeepLink Commerce platform serves an Uber button, allowing them to order an Uber to their destination with a few simple taps. Rather than using an API, which is much more difficult to integrate, Button's technology pulls information from the Foursquare app, and deep links this content into Uber, sending traffic from one app experience to another. This technology enables consumers to discover and re-engage with the mobile apps through one touch of a button.