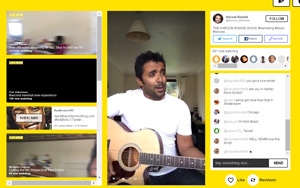 Television personalities like Al Roker are reaching from traditional broadcasting into the future of television, and will do it with help from technology like Meerkat and search engine optimization.

Al Roker Entertainment this week will launch three 5-minute to 15-minute pieces of programming that will transmit via Meerkat, the mobile app that allows users to watch live streaming video, according to one report. Creative and marketing experts say live-streaming technology and real-time search engine optimization will change the way the industry views the connection between television and search.

Search engine optimization will connect live streaming content in real-time from social tools like Meerkat and Periscope that allow viewers to interact with the broadcaster.

Aaron Goldman, CMO at 4CInsights, said google.com could index Meerkat video streams, but also Periscope with a Twitter "firehose" based on keywords and hashtags.

Meerkat.co has an embed function, which provides a Web-page player for Meerkat channel feed broadcasters to stream via typical Web pages, explains Weintraub. "Setting up the Meerkat embed player feeds on a third-party Web page in a blog or a Web site, which Google indexes, yields short-term SEO results," he said. (Read more about it here.) "The more authoritative a Web page, the faster it may index in google.com."

Roker isn't the only one experimenting with Meerkat. "My girlfriend and I do something called a bedkast," said Steve Isaacs, senior creative director of Interactive at L.A.-based bpg advertising. "Before we go to sleep, we fire up the phone to talk with each other, and suddenly we'll find people from London, Kuwait, Russia and other places in the world tuned into our conversation," he said. "We talk about their day, and those who tune in ask questions. We did it as a lark a few months ago, and then people started asking us to do it again."

Now Isaacs and his girlfriend "bedkast" from separate locations several times weekly. He describes it as having a dinner party without having to clean up the dishes.

Launching the app sends an alert as a Twitter tweet or Facebook invite to followers and friends who must login to Meerkat to view and comment in the live stream, but there's a feature called the Meerkat Map, which lets anyone see from where people stream, so you can stop by and peek into a different world.

After the stream, analytics let the user see total views, retweets, and emojis. The app produces long engagement times, between 20 minutes to 60 minutes, Isaacs said. People are engaged with the conversation, and can comment in the stream or post out to other social sites like Twitter and Facebook.