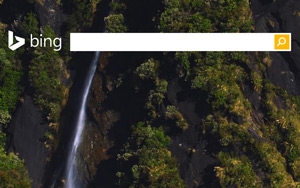 Obviously, an increase in organic searches will eventually increase the number of dollars that advertisers spend in search advertising on Bing.

"We’re estimating query volume gains from 10% to 15% as early as September -- not only from new users, but from existing Bing users who will now use Bing more frequently," wrote David Pann, Bing GM of Microsoft Search Advertising, in a post.

Windows 10 brings Bing to the forefront, steering many of the integrated apps to Microsoft's search engine. The update also bundles the Bing search engine with Cortana, so unbundling Bing from Windows 10 disables the voice assistant.

People can initiate a search by typing text queries in the search box -- or similar to Google Now, click the microphone button to use voice recognition and perform tasks hands-­free.

Cortana -- which is available in the taskbar -- offers a reminder setting, and uses information gathered from Bing to answer questions or provide answers before questions are asked based on calendar reminders and email messages. Similar to Window Phone, one feature for Windows 10 is active listening, but in the future Cortana will also offer to make reservations at restaurants as you search for them, according to Microsoft.

Today, the virtual assistant that has been available on Windows mobile phones since the launch of Windows Phone 8.1 appears in the Windows 10 desktop and the Edge bar.