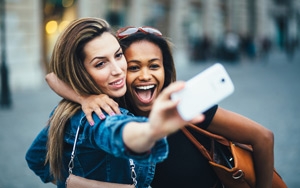 Multicultural growth has rocketed in the U.S. in the past 10 years.

“The growth in the [multicultural] population size is driving advertisers to realize they need to spend more time with them, because it’s also a growth in buying power,” says James Briggs, CEO of Briabe Mobile, a multicultural mobile ad firm.

African-American and Hispanic teens are more likely to use the Internet on their phones “almost constantly” at 34% and 32% respectively, according to a Pew research poll.

Reaching those segments is crucial for any marketer looking to build a well-rounded strategy. But the multicultural millennial affinity for and familiarity with the capabilities of smartphones, has blossomed into a demand for a seamless experience with advertisements.

The fast-growing Hispanic millennial market is one of the most sought after segments in the multicultural world, with a new generation of publications tailored to their needs springing up. For example, this week, CafeMom announced the launch of Vivala.com, a new Web site serving millennial Hispanic women with relevant content.

The reason why Hispanics in North America, a number of whom come from developing countries, may be so invested in mobile, says Mike Gamaroff, managing director of Kinetic Active, a tech division within WPP’s Kinetic Worldwide, is the mind-set they carry toward devices. For those who didn’t grow up with access to desktops, or don’t own multiple devices, a smartphone may be the first and only point of Internet access.

Some brands are starting to shift tactics from more specific multicultural marketing to “total marketing.” While total marketing may work for larger brands elsewhere, Briggs says it can be tricky on mobile given how personal the medium is. “My belief is that marketing works best when you target based on needs and passions,” he says, and that consumers appreciate when advertisers take the time to get to know them.

With census projections showing that multicultural populations will become a numeric majority by 2044, the advertising world is going to have to get to know the multicultural market very well.