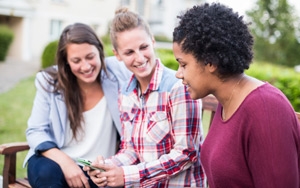 Young adults ages 18-29 have a high engagement with messaging apps, with 49% of smartphone owners using messaging apps that don’t automatically delete messages and 41% that do.

Some 36% of smartphone owners use messaging apps like Kik or iMessage. Seventeen percent use apps like Snapchat and Wickr that automatically delete sent messages. All findings are per a Pew Research Center survey.

None of the social media platforms the survey measured, including Instagram and Pinterest, had any statistically significant increase in usage between September 2014 and April 2015.

Facebook remains the most popular social media site, with 72% of online adults using it. Seventy percent of those who use Facebook log on once a day, and 42% say they log on more than that.

Pew’s findings are consistent with other research regarding chat apps and mobile device usage.

Another recent study commissioned by digital ad agency MRY, which examines millennial leisure time and mobile, found that 60% of millennials feel entertainment is the most important use of their smartphone, while 48% worry they spend too much time on their device.

The Pew poll surveyed about 1,900 adults from all 50 states by phone.