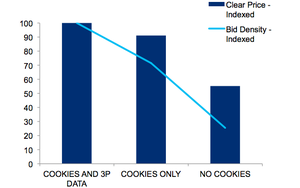 Some of the biggest trends reshaping the programmatic media-buying marketplace -- especially the shift toward marketers bringing their trading in-house -- suggest it is mainly about access to better data about targeting consumers via audience exchanges. While trades managed by demand-side platforms (DSP) and agency trading desks still represent the overwhelming majority of the marketplace, the so-called “self-service” market continued to accelerate during the first quarter, reaching its greatest share of the overall marketplace since it has been tracked.

“The pattern of growth for self-service DSPs continued, collectively bringing in their highest market share to date. While many posit this is due to more marketers buying programmatically in-house, we think it’s about the data,” explains Lizzie Komar, director of research and analytics for the Index Exchange, which is releasing its first-quarter programmatic marketplace report today.

“Own the DSP contract, own the data,” Komar continued, explaining that while some observers believe marketers are taking programmatic trading in-house to save money by cutting commissions to agencies, trading desks and managed services from DSPs and others, the real reason is simply to have a better understanding of how they are reaching consumers via programmatic markets, as well as ensuring that other third-parties don’t get access to that information.

“Marketers are increasingly protective of their data and have realized the value in investing in it,” Komar says, noting that “many marketers with self-service DSP contracts are just in it for license to the data -- they feel more comfortable owning that in-house as opposed to having their agencies handle the tech agreement and data ownership. Marketers realize that their competitive advantage in the future depends upon their ability to ingest, analyze, and use data to drive digital media strategy.”

The first-quarter data seems to support that logic in a number of ways. Aside from self-serve continuing to accelerate as the fastest=growing form of trading, trades in which data can be attributed explicitly to users continued to reap the highest prices and greatest “bid density” (number of bids made per biddable impression) in the marketplace.

Biddable impressions bought with no cookie data indexed about half the market value of impressions that had cookies with third-party data attached to them.

During the first quarter, impressions tied to cookies (with or without third-party data) accounted for 87% of the marketplace -- up a percentage point from the fourth quarter of 2014. More significantly, bid density was “highest for impressions associated with both cookies and third party data (28 and 75 points above impressions with cookies alone and cookieless impressions, respectively), a trend reflected in the clear price indexes for each impression type,” according to Index Exchange’s first-quarter report.

While other factors are likely contributing to it, one thing is clear from the report -- the number of bids per impression is continuing to rise, suggesting that competition is rising for the most desirable biddable impressions in the programmatic marketplace.

“The BPI (bids per impression) rate climbed throughout the first quarter, more than doubling by the end of the quarter,” the report noted. 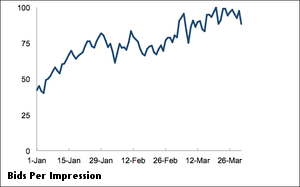 Another sign that the programmatic media-buying marketplace is starting to mature is the fact that prices paid for trades made via so-called “private marketplaces” -- trades negotiated directly between publishers and bidders utilizing deal IDs -- continues to rise.

“The price of first quarter private marketplace impressions (those associated with a deal ID), cleared at an average of 3.4 times the price of those won on the open exchange,” the report finds, noting:  “This represents a growing gap between the markets.”

While there likely are many factors driving the higher cost per biddable impressions in private vs. public deals, they also come down to some form of data enabling marketers to have a greater assurance that they are reaching the audiences they are trying to target. In some cases, it may simply be the contextual value of reaching those users via the more “premium” inventory negotiated between publishers and advertisers. In other cases, it means ensuring that they were less likely to include non-human and/or non-viewable audience impressions.