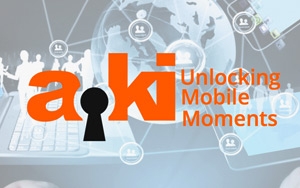 U.S. consumers’ ad blindness on mobile is not necessarily a bad thing, says Aki CEO Scott Swanson. It’s forced a shift in thought about advertising on a mobile device, which has fed the recent “moments” trend in mobile marketing circles.

“In mobile, there’s a nice opportunity – it really falls on the advertisement to be impactful. Moments have something to do with the opportunity to make the most of that small screen size,” says Swanson.

Swanson says Aki’s tactics to reach consumers at moments of heightened engagement is founded on quality location data -– as opposed to, say, the emotion of a consumer. Working solely with apps that are enabled with latitude and longitude, Aki eschews oft-misleading IP addresses.

Starting with latitude and longitude, Aki identified four basic mind-sets of consumers based on location: home,  work, out ( home and work), and traveling (at least 100 miles away from home, either for business or vacation).

Within each of the four mind-sets, Swanson says they have ID’d 130 different moments many of which show 50% more engagement.

They are also capable of crafting custom moments. Swanson cited an example of a telecommunications client that decided to target high-density events, like baseball games and concerts, with ads highlighting poor cell reception. (Cell towers are often overwhelmed at such events.)

Location accuracy is both a foundation element and a pain point for Aki. Swanson says it was important to them to identify quality location data, given the “reasonably high amount of fraud on the exchanges.”

Another area he says he wishes to avoid is the “creep factor” of ads that can sometimes reveal information that’s too specific for some consumers.

“For all the change that mobile devices have brought upon us, the old marketing adage remains true: to succeed, you need to know your customers,” stated Swanson.

Both Swanson and Bravo worked at Mobile Theory, as CEO and SVP of business and corporate development, respectively, which was acquired by Opera Mediaworks in 2012.