Is It Too Early To Talk Super Bowl? Marriott Thinks Not 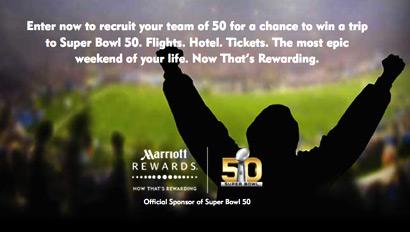 Super Bowl sponsor Marriott International is already gearing up for the big game with campaigns for its Courtyard brand and Marriott Rewards program.

Courtyard by Marriott is giving away a sleepover at Levi’s Stadium in the “Suite Stadium Contest,” while Marriott Rewards is launching its “50 to 50” campaign that includes a sweepstakes that gives members in three countries a once-in-a-lifetime chance to take a group of 50 of their friends and family to attend the game and enjoy an exclusive VIP Super Bowl 50 weekend in the San Francisco Bay area.

“As we enter our fifth year as the official hotel of the NFL and as the Super Bowl nears its historic 50th season, Marriott International was excited to raise the bar to unprecedented heights for fans,” Callette Nielsen, vice president and global brand manager, Courtyard, tells Marketing Daily. “Fans dream of these once-in-a-lifetime experiences, but Marriott International takes pride in making them happen.”

Similar to Marriott’s relationships with global leaders in the music and entertainment industry, the NFL sponsorship represents the company’s ongoing effort to bring exclusive experiences for guests and loyalty club members.

The 50 to 50 sweepstakes is being promoted on Facebook via a dedicated page and on other social media with the hashtag #50to50. The prize includes flights, hotel, tickets to the game and an unforgettable VIP experience. Members can enter to win through Nov. 30, and non-members will be able to sign up instantly for Marriott Rewards, which is free to join.

As a part of Marriott International’s worldwide sponsorship with the NFL, Marriott Rewards will participate in the League’s International Series “NFL on Regent Street” Fan Fest event on Oct. 24  in London, providing an interactive Football Challenge, surprise visits from special VIP guests and chances to enter the 50 to 50 sweepstakes. A few Marriott Rewards members will be invited to watch the Jacksonville Jaguars and Buffalo Bills square off at Wembley Stadium from a private suite on Oct. 25.

Courtyard’s overnight stay contest will be held the night before the Super Bowl in a suite transformed into a Courtyard guest room. Following a slumber party, the winner and three guests will continue to party during the Super Bowl 50 game. The winner will be determined through a series of social media challenges before closing in November. The prize also includes flights and tickets to the game.

The contest is being promoted on Courtyard.com and on social media with #SuiteSB50Contest.

Courtyard will also build momentum with a season-long “Journey to Super Bowl 50” road trip that travels through NFL markets across the country before reaching its final stop in San Francisco. Each stop includes a fan fest with NFL-themed games, NFL legend appearances, samples from the brand’s Bistro and special connections to brand contests and Marriott Rewards gifts. Fans can track the journey with #CourtyardNFL or Courtyard.com/NFL.

Courtyard is launching its newest NFL television campaign. The spots feature the brand inviting NFL anchor Rich Eisen to test their latest NFL-themed hotel innovations that go to humorous, overzealous extremes to please their guests. The spots will air throughout the season and can be viewed at the Courtyard YouTube page.