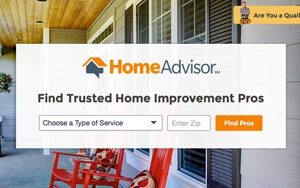 HomeAdvisor announced a partnership Friday with Google that allows homeowners to book appointments with home service professionals through the engine's search results. The partnership announced just days after IAC/InterActiveCorp, HomeAdvisor's parent company, confirmed an unsolicited bid to acquire Angie's list for $8.75 per share in an all-cash deal

A list of service professionals for home improvements had been one tool missing from Google's coffer. The company began experimenting in August 2015, offering a pre-screened list to residents in and around San Francisco. Earlier in the year Amazon launched a home services directory in 41 cities, 700 services, in a move some believe Google should make with Places or Maps.

The companies explain that users will see "Book Now" option on the profile, which will enable them to schedule an appointment through HomeAdvisor's Instant Booking technology, which launched earlier this year. It gives homeowners access to more than 500 professionals that do home projects from plumbing to remodeling to landscaping.

Chris Terrill, CEO of HomeAdvisor, believes the deal will drive customers to the small businesses through the marketplace, which drives an estimated $25 billion to $30 billion of gross marketplace transactions in 2015.