Down Under They Celebrate The Christmas Season 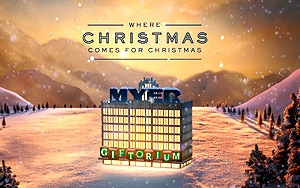 Australia's largest department store, Myer, is teaming with its agency Clemenger BBDO, Melbourne and animation studio Aardman to celebrate the holiday season with the "Where Christmas Comes for Christmas" initiative.

The concept uses Aardman's famous stop-motion animation — best known for "Wallace and Gromit" and "Shaun the Sheep"— to introduce four Christmas characters on a trek across mountains and through blizzards to find Christmas and to buy their Christmas gifts.

"Our idea was to take that truth and playfully hyperbolize it by suggesting that Myer was such a great destination for Christmas gifts that even Christmas itself comes to our store to shop," says  Simon Lamplough, group managing director, Clemenger BBDO.

"In terms of why retailers, and Department Stores in particular, make such a big deal of Christmas it’s simply because it’s the biggest sales opportunity of the year. A successful Christmas is crucial," he added.

This campaign differs from the store’s previous efforts due to the forward planning that's required for stop-animation.

Aardman spent more than four months sculpting the four characters by hand and filming them frame by frame.

"Storyboards, character designs and detailed character movements needed to be locked down before production began as going back to make changes mid-production would have been costly and time-consuming," says Lamplough. "We had great faith in Aardman though and that faith was repaid as they perfectly understood our vision and delivered for us."

In addition to the 60-second film, the story of these characters runs through in-store TVs, posters, a dedicated microsite, social media, catalogs, shopping bags, staff uniforms, wrapping paper, gift cards and visual merchandise displays. Every touchpoint at Myer has been transformed with the campaign designed to direct consumers toward Myer's Christmas gift destination, the 'Giftorium'.

The spot can be seen here.

Myer makes a point of celebrating the Christmas season not the holiday season.

"I think it’s fair to say that Australia is less concerned with political correctness than the U.S.," says Lamplough. "Everyone calls the holiday period ‘Christmas’ over here. For some people, that terminology may have religious connotations, but for many it doesn't. Either way, the idea of doing ‘Christmas shopping’ is well understood, and we weren’t concerned about any negative implications of using that vernacular."

Myer has formally worked with Clemenger BBDO, Melbourne since February 2015. The agency introduced Myer's first brand makeover in a decade with the "Find Wonderful" campaign that supported the love of shopping and the "great moment of joy that comes from finding just what you want."

"We’re embarking on a philosophy of doing fewer things, but doing them bigger and better," says Lamplough. "That means focusing on delivering big integrated moments that can rally all the business units at Myer together behind a common cause (or idea) rather than lots of smaller disparate campaigns all fighting for oxygen and creating communications clutter. This Christmas campaign is one of the first outputs of that philosophy."