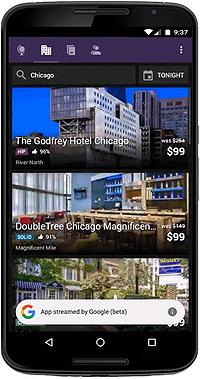 As part of the initiative Google calls "app-first content," search query results will now return some details from within apps served on google.com. If someone searches for a hotel room in Los Angeles, for example, they will see details of hotel and room availability without having to go into the mobile application.

Google began indexing the content of applications about two years ago, allowing people searching on its engine to find the best content, even if it resides deep inside the app.

Google engineers also have been working with a small group of partners such as HotelTonight, Chimani, Daily Horoscope or New York MTA Subway Map to explore other features, such as the option to stream some apps not installed on the phone, right from Google Search, provided the device has a good connection to cellular or WiFi service.

The use of the cloud-based technology Google is experimenting with allows users the option to test the app before downloading it.

With a tap on a “Stream” button next to the HotelTonight app result, the user will see an option to get a streamed version of the app, allowing the user to quickly and easily find what they need. In this case, it will allow the user to complete a hotel booking while streaming the app, similar to the way one would when in the app.

The move leaves more questions unanswered than answered, such as whether streaming an app on the phone -- without having to download it -- will stop or hinder any ad within the app from serving on the phone, and how the industry, and Google, will measure download and ad impressions.

Ads inside apps must weigh heavy on the minds of Google developers. The company also plans to forewarn mobile users downloading apps when it contains an advertisement.

Beginning Jan. 11, 2016, all apps in the Google Play Store containing advertisements and offers for in-app purchases will have a label in the description.

An email sent by Google says the company will require developers to sign into the Play Developer Console to declare whether the app contains an advertisement.

The label already exists for games in the "Designed for Families" category, but Google has extended the notice across its entire library.

"While developers are responsible for accurately declaring ad presence in their apps, Google may verify this at any time and display the 'Ads' label if appropriate," according to the email.