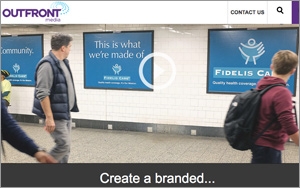 While the inevitable comparisons to “Minority Report” are probably a bit over the top -- thankfully there’s no retinal scanning involved -- Outfront Media, previously known as CBS Outdoor, is planning to roll out a fully addressable outdoor advertising network sometime in the not-too-distant future, according to CEO Jeremy Male.

Advertisers will be able to target ads down to the level of individual consumers if they so choose, based on information gathered from their smartphones.

More practically, advertisers will be able to use Outfront’s data management platform (not yet active but now in development) in conjunction with addressable ads to target specific groups and audiences, based on the concentration of consumers matching a profile at a particular place and time.

For example, Male explained: “An advertiser may say, ‘I want to reach Hispanic females ages 24-36 who have visited Target twice in the last month,’ and the DMP will automatically return options based on the vicinity of those consumers to various pieces of inventory in the network.”

Male added that advertisers can already “buy a billboard or a network of billboards, and through use of geofencing deliver mobile messages relevant to that billboard campaign.”

The initiative will include the extension of two new interlocking platforms, Outfront ON Smart Media and the Outfront Mobile Network. Indeed, Outfront is already beginning to offer various forms of addressable ads in select locations in major markets.

Last month Outfront bowed a new technology platform called Outfront On Smart Media, which will combine cloud distribution with Outfront’s programmatic distribution network. Some of the network’s capabilities are already on display at the new 34th Street-Hudson Yards subway station, where it is delivering targeted advertising to transit passengers. The company also recently introduced its new Mobile Network with capabilities including geo-fencing powered by xAd, which can be used in conjunction with Outfront’s out-of-home displays for location-based marketing programs.

While addressability obviously unlocks new strategic possibilities, Male made a point of emphasizing that advertising clients will still turn to outdoor advertising for its traditional strength as a “one-to-many” medium, capable of reaching large numbers of consumers on the go at a reasonable cost. That's a key advantage as broadcast media come under growing pressure in the era of audience atomization.

Male concluded: “Targetability and addressability will be a key growth driver, but generic branding is still going to be a key part of out of home’s continued importance in the media mix. Targeted messages are great, but you’ve still got to build brands.”