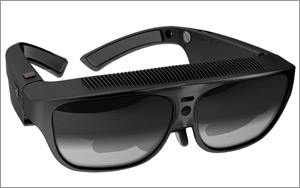 As a result of the deal, 21st Century will become the chief outside investor of ODG and will provide entertainment content through a "strategic partnership." Financial details were not disclosed.

Osterhout Design Group, a San Francisco-based company, has been making high-end night-vision goggles for some time and is attending CES this week to offer up its R-7 "augmented reality glasses" for enterprise/industrial applications.

The glasses are priced at $2,750, and offer stereoscopic 3D content or other animated imagery projected on top of real-world objects. For the user, this can project a video view equating to around a 65-inch TV screen.

In the near future, ODG hopes to offer up technology at a much lower price point for consumers. One industry estimate says virtual or augmented reality could become a $150 billion market in five years.

This past year Fox experimented with virtual reality content for theatrical movies “The Martian” and “Wild” through its Fox Innovation Lab.

In a statement, Jim Gianopulos, chairman/chief executive officer of 20th Century Fox Film, a unit of parent company 21st Century Fox, said: "We look forward to partnering with ODG and serving as its lead outside investor as the ODG team pushes the film experience into the future with its high-definition, cinema-wide field of view technology.”