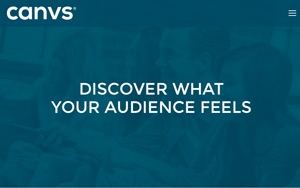 Canvs (pronounced “canvas”), a tech platform that measures consumer sentiment through social semantics, finalized a round of funding led by KEC Ventures valued at $5.6 million.

Jared Feldman, Canvs CEO, says that after spending several years in beta developing their product, the money will be used to build sales and marketing teams as well as improve their core technology. The company focuses on first-run TV, currently working with Sony Pictures, SMG, NBCU and Viacom.

Despite the eye rolling that the word “sentiment” causes among marketers, Feldman says he thinks his company has a good opportunity to crack into a market.

“Last year, there were 1 billion tweets about TV shows. Every brand is getting a stat with a number of tweets or social mentions, but they don’t know what they’re saying,” he says. Many brands have had to resort to cataloging social mentions in some cases almost by hand.

“$5 billion was spent on focus groups to figure out how people feel about something. But, if they can’t find out how people are feeling immediately, it becomes useless,” because of the transient nature of emotions, he adds.

Feldman wanted to bring the sensibilities of programmatic to market research by canvassing social media for strong feelings, allowing brands and networks to get accurate data within hours of the first run of a show.

“Social is a vessel for us—we’re going after the market research sector,” says Feldman, who says he wants to bring a level of thought and attention not possible before to quantify human emotion.