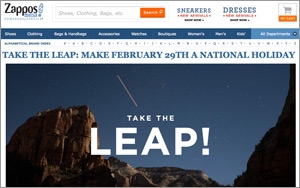 Online retailer Zappos, an Amazon subsidiary, will give its 1,600 employees a paid day off Monday. It plans to launch the Twitter hashtag campaign to spread the news.

The #TakeTheLeap campaign promotes Zappos' Change.org petition to get Leap Day declared a federal holiday, calling on the President and Congress to step in. The company's Web site lists leap year days through 2040. "The president can declare a one-time federal holiday by way of executive order," per the company's site. "Creating a new federal holiday for good will require congressional approval."

Zappos hosted a Twitter chat Thursday asking participants to share photos of themselves leaping, along with what they would do with the time off. The company asked in a Twitter tweet "How would you spend an extra 24hrs?"

Zappos' call center will close from for 24 hours beginning at 9 p.m. EST on Feb 28. Kristin Richmer, a Zappos brand awareness employee, told Adweek that customers calling in during those hours will hear an inspirational message encouraging them to celebrate Leap Day.

Arby's, known for its roast beef-filled sandwiches, won't close its stores, but will go vegetarian for Leap Day. The company unveiled plans to offer its first-ever vegetarian menu, highlighted by Arby's signature sandwich lineup, minus the meats that make them sandwiches.

The move turned into a marketing campaign that drove the general Thanksgiving shopping conversation on Twitter, with BrandWatch reporting that #OptOutside made it to No. 11 on the Top 15 trend list.