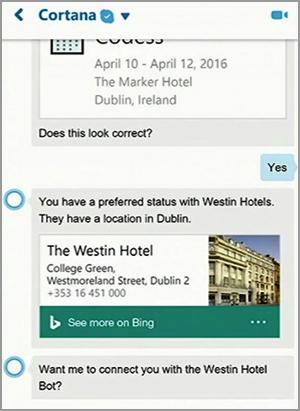 Microsoft is packaging Cortana's smarts with Bing's technology to create a developer framework for chat bots.

Despite the recent debacle with its teen social experiment, a Twitter bot called Tay.ai, Microsoft has introduced the company's Bot Framework, a tool in preview to help developers build their own chat bot for everything from Skype to Web sites to enterprise software applications that help plan travel.

Microsoft released the news at its Build 2016 developers' conference this week in San Francisco. For example, brands could create customer service chat bots for their Web site.

The framework includes automatic translation to more than 30 languages, user and conversation state management, debugging tools, an embeddable Web chat control and a way for users to discover, try out, and add bots to the conversation.

Microsoft CEO Satya Nadella puts the concept of "conversations as a platform" as one focus of the company's strategy. The other support for Azure, Office 365, and Windows 10. This means making the technology that allows developers to build bots that understand natural language many of which will likely support the Internet of Things (IoT).

Chat bots will connect digital assistants like Cortana with devices, ecommerce sites, and humans. Microsoft provided an example during the Build conference. The next generation of Skype will enable Microsoft's personal assistant Cortana to facilitate conversations between other bots using Skype.

In this instance, a bot from Cups and Cakes wants to know where to deliver the package schedule for delivery at the Moscone Center during the Build conference, and if she would like the package tracked. In another instance, Cortana connects facilitates a conversation with a Westin Hotel bot when she learns of an upcoming trip.

This provides a glimpse into how Microsoft sees bots on Skype powered by Bing and Cortana shaping the future.