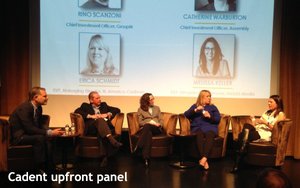 Cadent Network staged an upfront event Tuesday that positioned traditional television in a mix of media in which regular TV is just one of many options.

Cadent’s event at the Edison Ballroom on West 47th Street was styled mainly as an onstage “debate,” in which media buyers (otherwise known as “investment officers”) would articulate the merits or demerits of “content vs. audience.”

But it was more a panel discussion than an argument.

One thing the panel could agree on: With ratings declining on traditional TV -- particularly on some cable channels -- it’s a plus that there are other media where migrating audiences can be found.

“The fact that there are places other than television to get that audience is a very good thing at this point, since we see these ratings declining so dramatically,” said one panelist, Catherine Warburton, chief investment officer for Assembly.

She was referring specifically to a dramatic ratings drop cited earlier by Jim Tricarico, chief revenue officer for Cadent, who noted how ratings for Nickelodeon’s “Kids Choice Awards” dropped more than 60% from 2009 to the present. To him, such a ratings drop makes the media options offered by Cadent all the more attractive.

“With lower ratings [and] reduced advertising loads, networks will be very selective on the amount and type of business they take,” Tricarico said. “They will reduce the amount of upfront advertising in order to make room for higher-priced scatter."

“Given all of that, Cadent’s value proposition based on efficiency, savings and beating cable-direct prices by better than 30% can add major value to your efforts in this upfront season,” he said, presenting Cadent’s pitch for upfront dollars to the audience of ad agency reps.

“We deliver across a full national footprint, sourcing inventory from over 200 MVPD partners from the largest to the smallest, assuring distribution to 210 DMAs, 80-plus million homes, offering an access to all your premiere networks that you see here [referring to a slide with dozens of TV network logos],” Tricarico said.

Reaching audiences with the greatest possible efficiency via media buys on groups of networks or platforms, as opposed to buying one network or show at a time, seemed to be the theme of Cadent’s presentation and the subsequent panel discussion.

Using advancements in data to find these audiences is the direction in which the TV ad business is going, said panelist Rino Scanzoni, chief investment officer for Group M. “We’ve used content for many, many years as a surrogate to identify audiences,” he said. “With the influx of data, the TV business is moving away from looking at content purely as a surrogate to find audience and using data to find audience.

Still, the panelists fell far short of sounding the death knell for television.

“It’s really frustrating to see the TV ratings go down and not exactly know where, on a syndicated basis, where the audience is going,” Warburton said. “So it’s really an evolution of our business. Too often, when you’re with any agency, TV is old school [but] the death of TV is not happening. It’s just evolving. It’s not on the television. It’s migrating to other screens.”