Singling out ad-blocking in particular and fraud and viewability issues in general, GroupM this morning released a report calling for an “industry-wide collaboration” to address a variety of “integrity” issues plaguing the digital media marketplace.

"We are not now, nor have we ever been, in 'steady state' with digital advertising,” GroupM Chief Digital Officer Rob Norman states in the report, which estimates that digital ad spending will climb to nearly a third (31%) of all ad spending this year, despite its systemic issues.

The report, “Interaction 2016,” questions the “effectiveness of these investments,” citing “fraud, viewability and measurement” issues. While the top line of the report focuses on ad-blocking, it wasn’t clearly how the trend undermines the integrity of digital investments, because unlike fraud, viewability or measurement issues, advertisers generally do not pay when an ad is blocked by an ad blocker, although it clearly represents a potential loss of reaching digital consumers that have installed them.

Seeking to shed light on ad-blocking, the report noted that there continues to be a “lack of hard facts on the state of ad-blocking,” but based on data from 19 countries GroupM, found that ad-blockers were installed on an average of 22% of consumers’ devices.

“Countries with the highest percentage of consumers using ad-blocking tech included France, Poland and Austria -- each reporting greater than 30% of users,” the report noted, estimating that the U.S.’s ad-blocker penetration currently stands at about 25%. 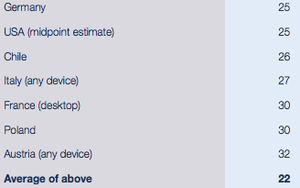