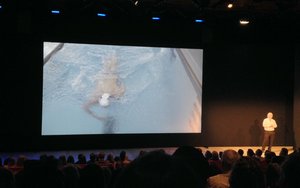 At The Times Center, a slew of NYT journalists and people from the Times’ branded studio announced the possibilities for advertisers to partner with the Times. Last year, the news organization showcased a virtual reality collaboration with Chris Milk and his production company, Vrse.

This year, there will be many more VR opportunities, including a space show "Seeking Pluto’s Frigid Heart," an Olympics VR piece, and a series composed of short-cut scenes that put you in a relaxing environment, one set in Iraq; one with a world-famous chef.

There is also an episodic series that sends viewers out with NYT photographers.

After a performance from neo soul group Lion Babe, reporters took the stage to talk about some of their biggest projects from the last year, including stories on sex workers, nail salons, Donald Trump, international piracy and Bernie Sanders.

T Brand, the NYT's content studio, is now operating as a full-service content agency and has more than 90 employees. The studio has completed over 150 productions, and its team works on strategy, creative, distribution and measurement.

Alex MacCallum, SVP and assistant editor for video, said the newspaper's audience has grown by 50%, and almost 40% of people who come to the site are highly educated, social and upwardly social millennials. Brands can bring their own films or collaborate with the the NYT on original content, which is then distributed on its site, Facebook, Google and other channels.

"This new slate of video programming presents our advertisers with the perfect opportunity to align with some of The Times' most creative journalism," stated Sebastian Tomich, SVP-advertising and innovation, The New York Times.