Navigation Takes A Bite From Search In Apps 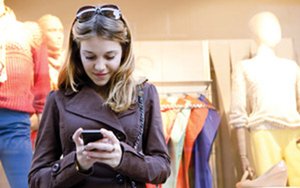 Looking at data from the top 100 apps that use Opera MediaWorks’ mobile ad platform to monetize traffic, the company found that mobile users individually spend about 30 minutes in each popular app -- news, games, entertainment, music -- with an average session length of 8.5 minutes.

Opera analysts examined data from hundreds of global ad campaigns and billions of impressions served on its platform and combined the data with some third-party data to analyze trends in the mobile app market and how consumers are interacting with mobile content and advertising messages.

Navigation, rather than searches, has become more common in apps, brands tell SearchBlog. They say consumer usually know what they want when they come to the site or use their apps. Opera Mediaworks sees something similar because fans have their favorite apps for specific actions such as Nordstrom for clothes shopping and ESPN for sports.

"The user's 'starting activity' on mobile is often not a generalized search,' said David Kurtz, chief product officer at Opera Mediaworks. He says the user typically selects an app on the device known for being an "expert source" on that topic.

"Though not entirely true in all cases, if I am looking for a restaurant in an unfamiliar location, for example, my first activity may be to open Yelp, which is an expert source for that activity," he says. "Or if I want to find out how the Golden State Warriors did, I open my ESPN app. In that sense, opening that 'expert app' substitutes for a generalized search."

Mobile search, which has been lauded as overtaking desktop search in 2015, is not taking up the majority of this mobile time, according to the report. Mobile search fits more into the category of micro-moments, where decisions are made for their immediacy -- I want this now -- and they don't lead to long-term loyalty and engagement with a brand neither.

What's driving the time spent in mobile apps? Games came in at the top category for impressions served on Opera’s mobile-ad platform in the United States in March 2016, followed by News & Information. At No. 2. Social Networking came in at No. 3, followed by Arts & Entertainment at No. 4, and Music, Video & Media at No. 5.

When it comes to engagement the five categories taking the top spots were Music, Video & Media, Travel, Lifestyle, Games, and Sports. Conversions looked a bit different with Lifestyle taking the No.1 spot; followed by Games; Education; Sports; Business, Finance & Investing.