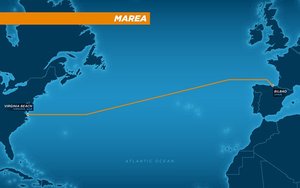 Facebook and Microsoft will lay a cable across the floor of the Atlantic Ocean that allows the two companies to transmit massive amounts of information to and from their data centers to support online services.

MAREA, a state-of-the art sub-sea cable across the Atlantic, will help meet customer demand for high speed, reliable connections for cloud and online services for Microsoft, Facebook and their customers, writes Frank Rey, director of Global Network Acquisition, Microsoft Cloud Infrastructure and Operations, in a post.

The new 6,600 km submarine cable system, operated and managed by Telxius, becomes the first to connect the United States to Southern Europe -- from Virginia Beach, Virginia to Bilbao, Spain and then beyond to network hubs in Europe, Africa, the Middle East and Asia.

The project will begin in in August 2016 with completion expected in October 2017.

When finished, the underwater cable will have the capacity to transfer data from one location to another in speeds of up to 160 terabits per second of bandwidth, about 16 million times the bandwidth of a typical home Internet connection

It will allow the two companies to move enormous amounts of information between the many computer data centers and network hubs that underpin their online offerings, from advertising to cloud services.

Rey explains that the open design that allows it to connect with a variety of networking equipment should help to lower costs and make it easier to upgrade equipment when needed, which leads to faster growth in bandwidth rates since the system can evolve at the pace of optical technology innovation.

That's a critical component when building and maintaining cloud infrastructures.

It would move the data centers powering cloud services like streaming video, search support, and the ability to serve advertisements in a variety of media across the Web.