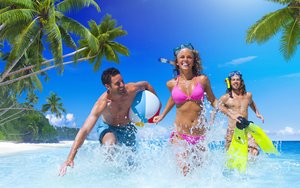 The summer season is here and school is almost out for most. With the changes come a focus on travel-related paid search and television advertisements. Two separate reports reveal that advertising spend by some of the largest travel companies demonstrates the success that comes from cross-channel campaigns.

During the first four months in 2016, 3,288 advertisers spent $107 million sponsoring travel-related keyword groups on desktop for search advertising -- up 13% compared with the $95 million in advertising that companies spent during the same period in 2015, according to data released from AdGooroo Wednesday.

The data looks at paid-search advertising in the travel sector, examining the top 250 non-branded keywords on Google desktop from January through April 2016.

The findings suggest that the Priceline Group was next among travel parent companies with an 11.93% total click share during the period from its sites Kayak.com with 6.94%; Booking.com, 3.33%; and Priceline.com, 1.66%.

Some of these brands also have success with ads running on television. One of the top spenders for cross-channel campaigns is Expedia.com. While the company led all advertisers in paid-search advertising click share, as Adgooroo notes, Expedia.com also spent 85% more on national TV advertising in the U.S. during the first four months of 2016 compared with the same period in 2015, according to Skift, citing data from iSpot.tv.

Much of Southwest's advertising focuses on its low fares compared to its competitors. Germany-based Trivago.com, the runner-up, spent an estimated $28 million between January and March 2016.

Some of those vacation deals are more readily available through mobile searches and though apps, but even on desktop the combinations of titles and descriptions in the ad copy can result in better interactions between advertisers and consumers.