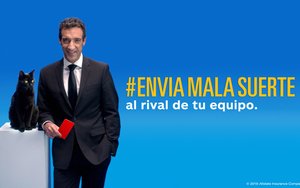 For the past five years, Allstate’s Hispanic advertising character, Mala Suerte, has been reminding people that bad luck can strike at any time -- something soccer fans know all too well.

To celebrate Copa America Centenario -- the oldest international continental soccer competition in the world -- and the faith fans put in their rituals and superstitions, Mala Suerte is enlisting the help of his black cat, Lucky, to foretell the fate of the tournament’s participants. However, he won’t be picking the winner -- he’ll be predicting the loser.

After first successfully predicting the losing team in Brazil in 2014, Lucky will once again tap into his fortunetelling abilities in the upcoming Cup, taking place in the United States for the first time in tournament history.

Lucky was introduced during halftime of the Mexico-Chile International Friendly game on June 1 in San Diego. Leading into each match, Lucky will predict the loser of the upcoming game through a variety of picking methods that will be captured in short videos and posted to social media. Former Mexican National Team legend Claudio Suárez will help reveal Lucky's first picks alongside Mala Suerte live from Los Angeles ahead of the first tournament match on June 3.

As the tournament's top two teams prepare to take the field for the finals in Rutherford, NJ on June 26, Lucky will make his final prediction alongside Mala Suerte live on ESPN Deportes' "Futbol Picante." Fans across the country can tune in to see Lucky reveal the outcome of this summer's most highly anticipated soccer match-up.

The campaign will tap into fans’ alliance to their teams by encouraging consumer participation on social media. Fans can follow Soy La Mala Suerte on Facebook and Twitter to discover their team’s fate and try to influence Lucky’s decision by using the hashtag #EnviaMalaSuerte followed by their rival team.

"For the past six years, Allstate's Mala Suerte has personified the bad luck that can come at any time by not having the right protection," said Georgina Flores, vice president of Integrated Marketing Communications for Allstate Insurance Co. in a release. "The campaign is about celebrating the fans and their passion for soccer and alliance to their teams, and to serve as a reminder that the good hands of Allstate are there to protect you from the uncertainties of life and unforeseen bad luck.”

Allstate is an official sponsor of the Mexican National Team and Major League Soccer.

Stemming from the success of its national general market advertising campaign “Mayhem,” Allstate introduced “Mala Suerte” to Hispanic audiences in December 2010 to highlight the protection, value and peace of mind that Allstate provides when bad things happen. The word “mayhem” has no literal translation in the Spanish language, which led Allstate to create “Mala Suerte” to resonate more directly with Hispanic consumers.